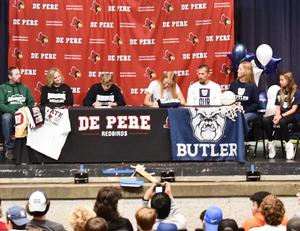 Meulemans, the daughter of Jeremy and Kacy, committed to the Butler University women’s basketball team, an NCAA Division I program in Indianapolis.

Corrigan, the son of Sean and Bobbie, committed to wrestle at UW-Parkside, an NCAA Division II school in Kenosha.

During the 2020-21 basketball season,  the 6-foot Meulemans surpassed 1,000 career points. She ranks No. 2 on De Pere’s career scoring list with 1,149 points and needs 240 points to move into the top spot. She also became the single-season record holder as a junior, with 559 points.

Last year, she averaged 20.7 points per game while leading the Redbirds to a 23-4 record and a WIAA Division 1 sectional semifinal game. She was named to the Wisconsin Basketball Coaches Association all-state first team.

She also was selected to the Fox River Classic Conference first team and all-defensive team as a junior and sophomore, and earned second team all-FRCC honors as a freshman.

“In three years as a varsity player, Jordan has helped the Redbirds to 50 wins,” DPHS coach Jeremy Boileau said. “Jordan is a very versatile player who is able to use her athleticism and shooting to create difficulties for opposing teams. She has the unique ability to score at the rim, from midrange and from the 3-point line.

“While most people see and appreciate how good she is on game nights, one of the most impressive things about  Jordan is how she has developed her talents through countless hours in the gym and weight room when no one is watching. Jordan has matured into a dedicated leader and will be counted on to help direct our team to continued success this year.

“Our coaching staff is extremely proud of Jordan and wish her success at Butler.”

“Shane is a hard-working and driven individual with a true passion for the sport,” De Pere coach Zach Hendzel said. “It is extremely rewarding as a coach to see the hours of blood, sweat and tears culminate in this day.

“I am proud of the work Shane has put in, and there isn’t a more deserving individual of this recognition. He is a respected leader, a talented wrestler, and a great person. From all of De Pere wrestling, we wish him the best in his senior season and in his journey to the next level.”